Well it’s finally time to release 10 tracks from the concert at the Drawing Room in Brooklyn we did with the great Ted Brown. The Jon De Lucia Octet recorded this, their first concert, in the fall of 2016. We’ve played a lot of music since then, but this one was special. You can read the notes below, and order the CD here at jondelucia.com, or on CD Baby, Amazon, iTunes. 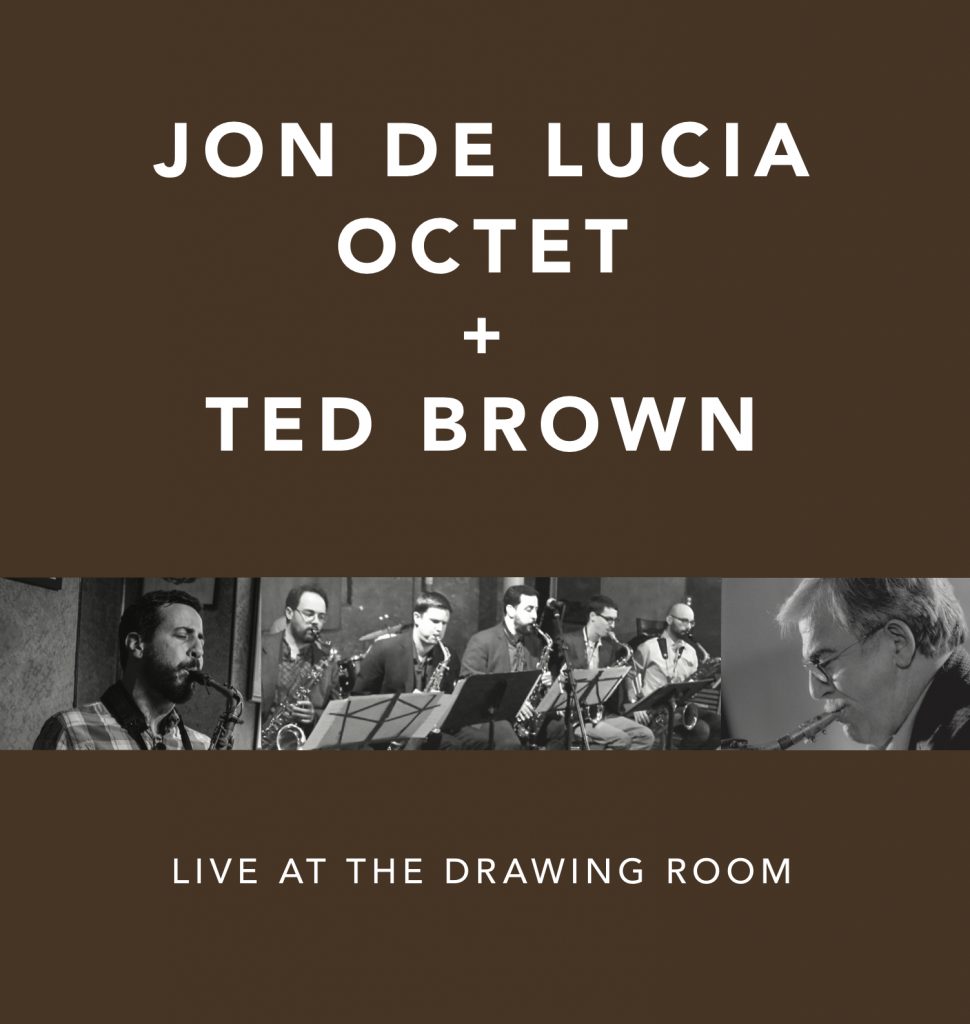 “Some jazz listeners disdain “West Coast jazz, “cool jazz,” or any music in the neighborhood of Lennie Tristano (not just East 32nd Street) as so cerebral that it’s barely defrosted.  Jon De Lucia’s Octet shows how wrong that perception is: this music is warm, witty, embracing, not Rubik’s Cube scored for saxophones.  Rather, the playful, tender spirit of Lester Young dances through everyone’s heart.  This impassioned group swings, even when the players are intently looking at the score.  For this gig, the Octet had a great spiritual asset in the gently fervent playing of Ted Brown, a Sage of melodic invention.  Also, this session was recorded at one of New York City’s now-lost shrines, Michael Kanan and Stephanie Greig’s “The Drawing Room,” a sacred home for all kinds of music.  I am grateful that Jon De Lucia has created this group: so delightful in whatever they play.  You’ll hear it too. “

Saxophonist Jon De Lucia met the great tenorist Ted Brown in 2014, and got to play with him soon after. He was and is struck by the pure lyricism and honesty in his improvising. One of the original students of forward thinking pianist Lennie Tristano in the 1940s, Brown, along with Lee Konitz, is among the last of this great school of players. Later, when De Lucia discovered some of Jimmy Giuffre’s original scores from the Lee Konitz meets Jimmy Giuffre session of 1959, which Brown and Konitz both participated in, he knew he wanted to put a band together to play this music with Ted.

Thus the Jon De Lucia Octet was formed. A Five Saxophone and Rhythm lineup with unique arrangements by the great clarinetist/saxophonist Jimmy Giuffre. The original charts featured Lee Konitz on every track, and the first step in 2016 was to put a session together reuniting Brown and Konitz on these tunes. An open rehearsal was held at the City College of New York, Lee took the lead and played beautifully while Ted took over the late Warne Marsh’s part. This then led to the concert you have here before you.

De Lucia steps into Lee’s shoes, while the features have been reworked to focus on Brown, including new arrangements of his tunes by De Lucia and daughter Anita Brown. The rest of the band includes a formidable set of young saxophonists, including John Ludlow, who incidentally was a protege of the late Hal McCusick, who also played on the original recording session of Lee Konitz meets Jimmy Giuffre, and plays the alto saxophone, now inherited, used in the session. Jay Rattman and Marc Schwartz round out the tenors, and Andrew Hadro, who can be heard to great effect on Venus De Milo, plays the baritone. In the rhythm section, Ray Gallon, one of NYC’s most swinging veterans on the piano, Aidan O’Donnell on the bass and the other legend in the room, the great Steve Little on the drums. Little was in Duke Ellington’s band in 1968, recording on the now classic Strayhorn tribute …and His Mother Called Him Bill, before going on to record all of the original Sesame Street music and much more as a studio musician.

The show was sold out at Brooklyn’s now defunct Drawing Room, operated by Michael Kanan and Stephanie Grieg. Along with the music previously mentioned, De Lucia had recently acquired some of the original parts from Gerry Mulligan’s Songbook session, which featured Konitz, Al Cohn, Zoot Sims and Allen Eager in another great sax section recording, this time arranged by Bill Holman. Here the band plays “Sextet,” and “Venus De Milo” from that session. Brown, here making the band a Nonet, plays beautifully and takes part in every tune, reading parts even when not soloing. Not included in this CD is an extended take of Konitz’s “Cork n’ Bib” and Giuffre’s piece for three clarinets, “Sheepherders.” Possible bonus releases down the line!

Since this concert, the Octet has taken on a life of its own, covering the repertoire of the original Dave Brubeck Octet, more of the Mulligan material, Alec Wilder, and increasingly De Lucia’s own material. De Lucia continues searching for rare and underperformed material, rehearsing regularly in NYC and performing less regularly. One can hope there is much more to come from this talented group! 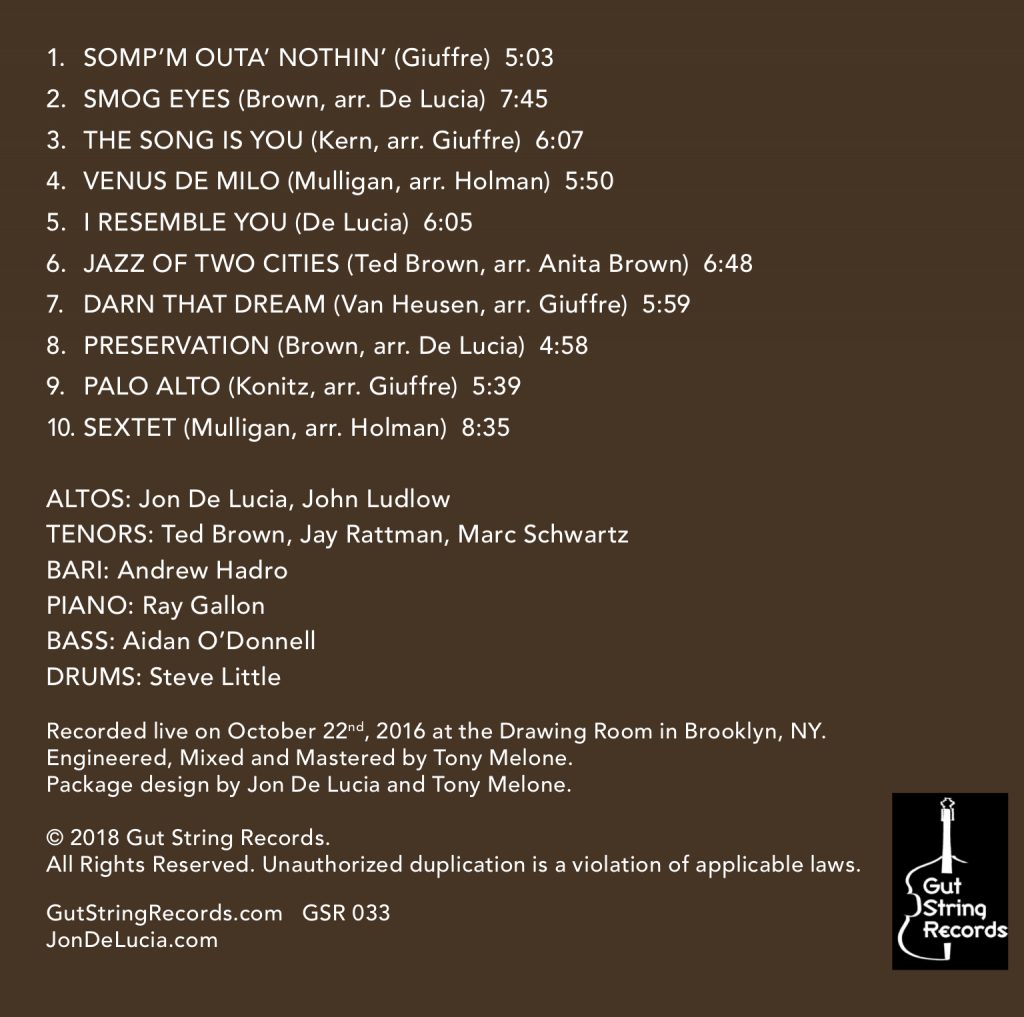