Bach Shapes, my new book of interval shapes for saxophone, officially releases today. You can pick up a copy in my online store.

To commemorate the release I want to take a moment to look at how one of my saxophone heroes, Paul Desmond, regularly employed material like the shapes in the book in his playing over the years. This is the first post of what I will call the Bach Shapes sub-blog, where I will cover and expand on the content of the book. Enjoy!

Desmond was of course influenced by classical music, as was the whole Brubeck gang when Dave and tenor saxophonist Dave Van Kriedt were at Mills College studying under french expatriate composer Darius Milhaud in the late 1940s. This was the beginning of the Dave Brubeck Octet, which included Desmond and clarinet/baritone saxophonist Bill Smith. The Octet performed many of the homework assignments that Brubeck, Van Kriedt, and Smith had written for class. An example that we’ll be performing with my group next week at Sir D’s Lounge is “Fugue on Bop Themes” one of 5 fugues that Van Kriedt wrote for the band, titled “Fugo Mugo” on the original chart.

This carried on to Desmond’s first recording as a leader, where two of Van Kriedt’s fugues are played, including this one.

Here is the heading of the score for this piece, from Dave Van Kriedt’s personal collection: 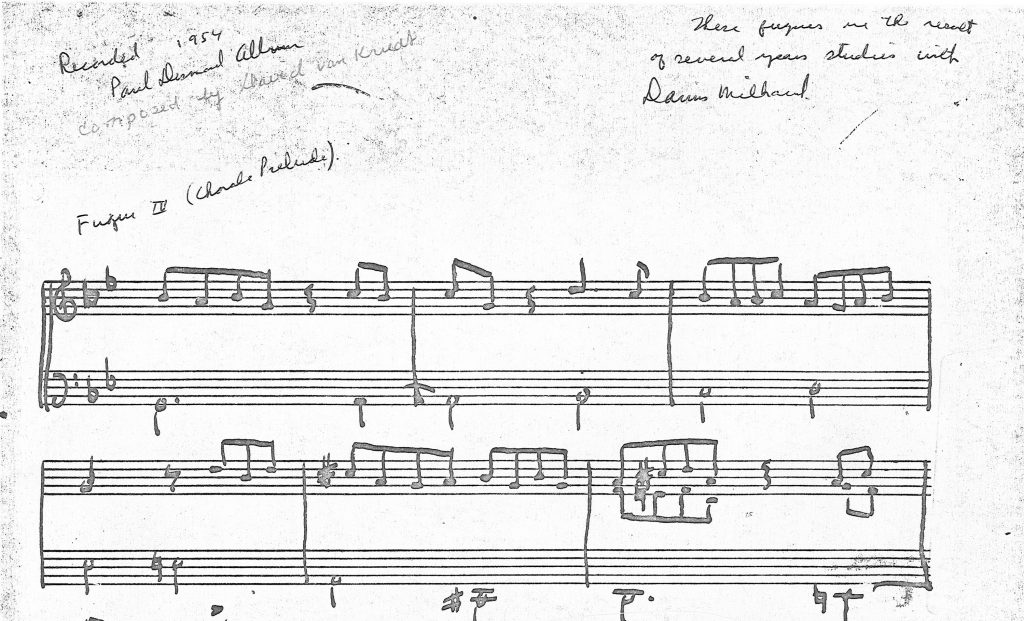 Desmond would go on to improvised counterpoint with Brubeck in the quartet, something they would often do after solos, as they do here in this version of “All The Things You Are” from 1954:

Paul Desmond, “All The Things You Are” Example 1

But aside from these more literal uses of baroque material, Desmond’s improvising is almost always motif based, using short and long phrase ideas then carrying them through the changes, changing their metric placement, often interspersed with clever use of tensions and color tones, revealing a great harmonic knowledge as well as melodic.

An early example, from 1954 again, is with the Dave Brubeck Quartet Live at Storyville. It was this solo that started the idea for my book and is the reason the first etude in the book is also based on this tune: “Gone with the Wind.”

There are at least 3 motivic phrases here, and it seems like in this early period Desmond was working out this kind of material more clearly than in later examples where he would break up the structure a little more. Hearing these clear early instances is a key to understanding his phrasing of later years.

Here is the first one (in Eb transposition):

Note the clever twisting of the phrase leading into the Em7 and on to adapt to the changing harmony. Then there are a couple of measures away from the pattern before he launches into the next one at the top of the second half of the form, where this same harmonic sequence happens again:

This time he breaks away from the opening intervallic sequence pretty quickly but it informs the answering phrase in the 3rd and 4th measures. Finally there is this sequence over the minor harmony of the tune:

Here he carries on the rhythmic motif in the third measure but not the intervallic structure, then builds to a great peak high Bb at what is the climax of the solo and the structure of the tune, before ending with a simple blues phrase to hand off the solo to Brubeck.

In my next post, I will continue with more example of Desmond solos over the years, where he uses concepts like those above but often with great subtlety. I will also create new examples using some of the shapes from my book. In the meantime, enjoy this free download my etude on “Just Friends” from Bach Shapes.

Diatonic Sequences derived from the music of J. S. Bach, for saxophone. Includes 4 jazz etudes, an explanatory introduction and the Shapes transposed into all keys. More information at www.bachshapes.com.

55 in stock (can be backordered)

The first Bach Shapes book of sequences derived from J.S. Bach, for saxophone and all treble clef instruments.

“Jazz musicians have naturally gravitated towards the music of JS Bach for years, so a book like this one has been a long time coming. Jon has done a wonderful job capturing various snapshots of Bach’s seemingly infinite musical language, organizing these shapes in a setting that could be very useful to improvisers. A truly interesting and enjoyable book that will hopefully lead to more volumes in the future.”

A unique approach to scale/interval practice, Bach Shapes is the music of J.S. Bach distilled to its basic elements: beautiful melodic shapes. These can be studied as technical exercises, or used as building blocks for jazz improvisation. Suitable for any instrument and currently being used by guitarists, oboists, clarinetists and more. The studies are drawn from Bach’s violin, cello, flute and keyboard music and ordered by difficulty, transposed into all keys. Learn to stretch your range and play intervals more evenly with these musical studies. At the end are four etudes based on jazz standards. The cover and interior has been beautifully designed by Chrissy Kurpeski.

“I really dig this book, there are so many musical ideas that one can find in Bach’s music. It’s about time someone like Jon comes along to organize it to be practiced by jazz musicians. It’s good both for the chops, vocabulary and knowledge of harmony. You really have to know what you’re doing when you utilize his devices.”
Dmitry Baevsky, NYC Saxophonist

“This book is great for practicing and learning really nice sounding passages from Bach in a more focused manner. All passages are transposed as well so you can focus on a particular key that needs work. The engraving is very clear and spacing very well done, its been on my music stand for a while now and has really been fun!”
–Andrew Hadro, NYC Freelance Saxophonist

Check out the Bach Shapes Etudes now for sale too!

1 review for Bach Shapes Book(PRINT): Diatonic Sequences from the Music of JS Bach