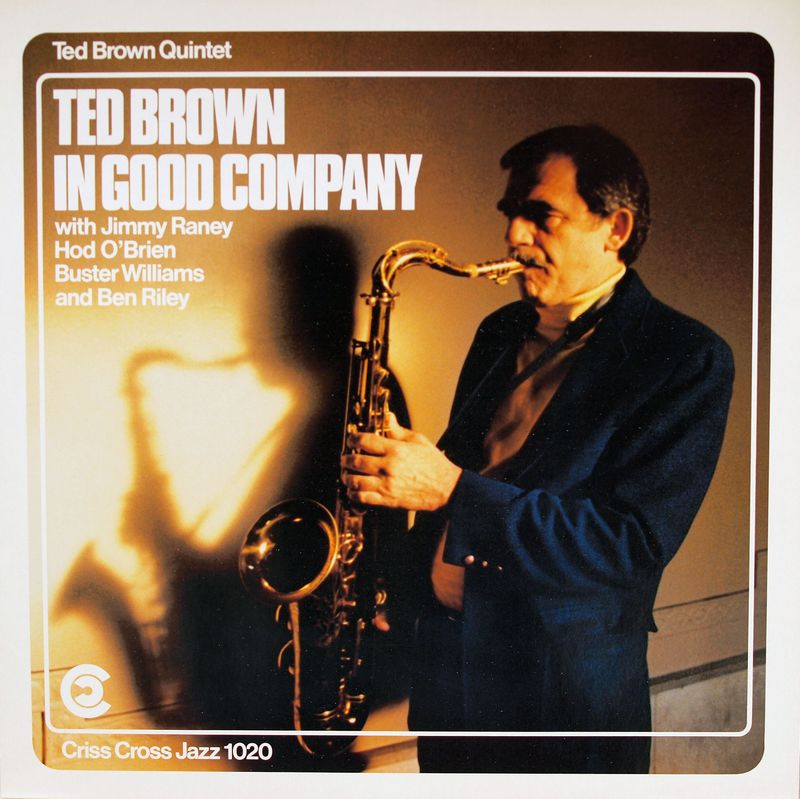 A very happy 91st Birthday to one of my musical heroes and friends, Ted Brown. We released our first recording this year on Gut String Records, playing arrangements of Ted and my tunes along with some from Jimmy Giuffre and Bill Holman. You can check that out at gutstringrecords.com. We conducted this interview a couple of years ago, when I was putting together my first published article on the great Lester Young. An overview of Lester’s style, it was finally published a couple of months ago here: Jazz Research Journal. I also interview Lee Konitz for the article and will post his interview later. For now enjoy this brief discussion on Lester Young.

How did Lester Young influence your playing?

When I was in High School in California I was a big Coleman Hawkins fan. I didn’t know much about Lester Young until I turned 18 and was drafted into the Army (1946) and was assigned to a Post Band in Virginia where I met musicians from Chicago and New York. That is where I first heard recordings of Lester Young and Charlie Parker.

I visited New York one weekend while in the Army and saw Lester Young at a club on 52nd Street and was just amazed at his clean sound and how hard he could swing with the rhythm section. When he finished the set he held his horn over everyone’s head in the packed club and walked out (without the case) to the sidewalk. My friend and I followed him as he went down the block to another club and sat in there. He seemed to enjoy it so much and sounded so good that I knew I wanted more of that and just had to come back to New York somehow after I got out of the Army…which I did 2 years later.

But it took some time for me to understand the difference between his approach and that of Coleman Hawkins. First of all, their tenor sounds. Hawkins had a big sound but rougher with more vibrato. Lester’s sound was softer and cleaner and much more pleasant. The Hawkins melodic line was more vertical like running the changes where Lester was more horizontal and flowing and swinging, with some vibrato…but usually just a little at the end if a phrase…more like Billie Holiday.

What do you think about his rhythmic feel and phrasing?

Well Pres used to play drums in his father’s band when he was very young. But he gave it up because he said there was too much stuff to pack up at the end of the night and, by the time he finished, all the little chicks hanging around would already have gone with the other cats in the band.

But he had a great sense of time that he was just able to make flow even with some of the early Count Basie records where the rhythm section is kind of heavy at times, he was able to get above that and just sail along. It was also his sense of syncopation and little rhythmic figures he would use to give it a boost…even if he was just using one note. And he knew how to keep it simple and leave some space. It wasn’t non-stop eighth notes or sixteenth notes.

I saw him a few times at Birdland and he didn’t like busy drummers. There is even a session on YouTube where he takes the horn out of his mouth and turns around to the drummer and says “Just a little tinkey-boom” meaning just some straight cymbal beats.

I heard him one night start off a tune and just say, “Gs if you please” and start playing a blues in G. He was a funny cat and had his own vocabulary…a lot of which became jazz lingo.

Why did Lennie (Tristano) hold him in such high regard?

Well, Lennie was trying to teach students to improvise with a good melodic line over standard tunes. So working with the recordings of good solos is one way to do that.

But another way is to try to write a solo of your own…not as a head arrangement but a solo you would like to improvise if you could. And since solos go by so fast, that allows you to slow it way down, so you can hear something and try different things. In fact that is what Lennie told me to do on my very first lesson (with a lot fewer words).

He knew I had already copied a lot of solos off records so he had me concentrate on writing something of my own every week for a couple years. And that was great because he would often play the changes with me and discuss ways to make the line more interesting. And then tell me to memorize it. That really helped me a lot. And a few of those lines were eventually recorded.

Later on he had me go back and just sing with records instead of writing them out, just to get the feeling of the solo and the phrasing and the way they built their melodic line. And he had me do that with Bird as well as Pres. And that does help develop a sense of singing through your horn.

I understand Warne and Connie used to be very strict with students about singing the solos…with and without the record…before playing them on your horn but Lennie never told me that. In fact one of Warne’s students said he worked on “Dickie’s Dream” for a year before he let him play it. Also Sal Mosca said he worked on singing one Bird solo for a year!! That seems extreme to me.

How do you think he influenced others, and who in particular?

Well, Lester’s sound and flowing melodic line certainly influenced the entire sax section of Woody Herman’s Band…the four brothers band…Stan Getz, Zoot Sims, Herbie Steward, Serge Chaloff…plus Al Cohn and Jimmy Giuffre. And of course through Lennie’s influence both Lee Konitz and Warne Marsh covered a lot of Lester Young material and loved his pure sound and ability to swing. Allan Eager was one of the earliest. In fact he was playing at that club on 52nd Street in 1946 where Pres went to sit in. Wardell Gray was another…also Brew Moore. Dexter Gordon was also heavily influenced by Pres and Bird and was a transition for tenor players who were fans of both.

What do you think Warne Marsh learned from Lester?

Do you have a favorite solo?

Well it is hard to pick one…but I think I would say “Tickle-toe.” But “Lady Be Good,” “Broadway,” “Pound Cake,” are also great and many others…”Clap Hands Here Comes Charlie,” “Shoe Shine Boy,” “12th Street Rag,” “Let Me See,” “I Never Knew.” Willie Dennis and I did “Tickle-toe” on my first record date with Ronnie Ball. We told the producer it was Lester Young’s solo but they called it “Prez Sez.” And we did “Broadway” on the Free Wheeling album with Warne and Art Pepper.

Were you influenced by Lester’s ballad playing as well?

Yes, especially the recordings he did with Billie Holiday. They had similar feelings, sounds, vibratos. But I preferred his medium and up-tempo tunes because of his rhythmic drive.

By the way there is a group on Facebook called “The Lester Young Appreciation Society” which you might want to check out. There are some real fanatic record collectors who know all the alternate takes and contents of packaged sets, etc. but there are also many musician’s comments and some great photos.

“Some jazz listeners disdain “West Coast jazz, “cool jazz,” or any music in the neighborhood of Lennie Tristano (not just East 32nd Street) as so cerebral that it’s barely defrosted. Jon De Lucia’s Octet shows how wrong that perception is: this music is warm, witty, embracing, not Rubik’s Cube scored for saxophones. Rather, the playful, tender spirit of Lester Young dances through everyone’s heart. This impassioned group swings, even when the players are intently looking at the score. For this gig, the Octet had a great spiritual asset in the gently fervent playing of Ted Brown, a Sage of melodic invention. Also, this session was recorded at one of New York City’s now-lost shrines, Michael Kanan and Stephanie Greig’s “The Drawing Room,” a sacred home for all kinds of music. I am grateful that Jon De Lucia has created this group: so delightful in whatever they play. You’ll hear it too.”