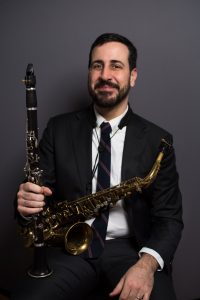 Jon De Lucia is a Brooklyn based saxophonist and composer. Originally from Quincy, MA, Jon has become an integral part of the New York scene. Predominantly a student of jazz, he also has a deep interest in the folkloric music and instruments of Cuba, Japan, Ireland and Italy, having performed on a variety of ethnic flutes, drums and stringed instruments. He has studied saxophone with Lee Konitz, George Garzone, Greg Osby, Bill Pierce and Joe Lovano and flute and clarinet with Tobi-Ann Kocher and Andrew Sterman. Other teachers include Bob Moses, Bill Ochs (irish whistle), and Hitomi Nakamura (japanese hichiriki). Jon has led his groups and played as a sideman in Boston, New York and all over Japan with such musicians as Putter Smith, Michael Kanan, Steve Little, Bill Crow, David Tronzo, Bob Moses, Maeve Gilchrist, John Lockwood and Thomas Morgan among others. He leads the Jon De Lucia Group, who released Face no Face (2006), and As The River Sings (2017); the baroque improvising Luce Trio, Pieces Vol. 1 (2012); and the Jon De Lucia Octet, which recently held a concert featuring the legendary saxophonist Ted Brown, recording to be released in 2018. He is the author of Bach Shapes, a new method book for saxophone focusing on the music of J.S. Bach. He continues to compose, arrange, perform and teach privately and as an Adjunct Lecturer at City College of New York in New York City.

2019 – Performed the Glazunov Saxophone Concerto as the soloist with the Brooklyn Conservatory Community Orchestra, Plymouth Church.

2018 – The Finzi Bagatelles for clarinet with organ at Plymouth Church in Brooklyn.

2018 – Clarinet and Flute for HBO’s Random Acts of Flyness.

2018 – Principal Clarinet and bass clarinet with orchestra for a tribute to Maestro Maurice Peress in Chelsea, Debussy’s “Prelude to the Afternoon of a Faun” and Gershwin’s Piano Concerto in F.

2013 and 2014 – Clarinet, Bass Clarinet and Flute with Solas, Irish supergroup, as part of A Christmas Celtic Sojourn at the Emerson Theatre in Boston.

2014-2015 – All woodwinds for Netflix’s Unbreakable Kimmy Schmidt Seasons 1 and 2. Including on screen appearance in Season 1 Episode 7.

“An incredibly beautiful and interesting take on early music: alto sax, Sruti box, electric guitar, and bass. It’s serene, reflective, and full of space.”
-Something Else Reviews (Luce Trio made top albums of the year: Something Else)

“Brooklyn saxophonist and composer Jon De Lucia, guitarist Ryan Ferreira and bassist Chris Tordini interpret Baroque and early-music pieces in a fluid chamber-jazz format. The results are downright magical.”
-Timeout NY (plus a feature in print as top 5 things to do for the week of January 24, 2013.)

“De Lucia’s alto has a lovely gentleness and liquid tone that is well matched by Ryan’s subtly adventurous line-cluster creating/part rendering and Tordini’s matter-of-fact yet essential lower end. It’s music that will wow you little-by-little. The music moves and so you are moved. A beautiful disk!”
-Gapplegate Music Review (full review: Gapplegate)

Saxophonist Jon De Lucia dazzles not only with his virtuosity and compositional skills, but also with his ability to convey emotion through probing, focused melodic statements and the sublime coherence of his band.
– Matthew Miller, All About Jazz

Composer and jazz sax-er Jon De Lucia is a soul on a mission!! With his highly original approach to this art-form, De Lucia is one of those comprehensively gifted musical craftsmen with flawless technique, plus an abundance of compositional ideas.
-George W. Carroll, EJAZZNEWS.COM Review

Let the music breathe is one of jazz’s most revered mantras, but far easier said than done. Boston-based alto and soprano saxophonist De Lucia accomplishes it with substance and style on his new CD, stitching together edgy improvising with surprise-filled writing that sounds both mysterious and eminently accessible.
-Bob Young, Boston Herald

Saxophonist JON DE LUCIA’s ridiculously assured Face No Face (Jonji) was one of the pleasant surprises of 2006. De Lucia’s alto solos had the headlong linear drive of the Tristano school by way of Steve Coleman and Greg Osby, and his wide-ranging compositions varied texture, dynamics, and harmonic framework without ever losing the groove.
-Jon Garelick, Boston Phoenix

We like Jon De Lucia’s new Face no Face (Jonji Music) not simply because the young saxophonist has chops (yes he does) but because he challenges those chops with fresh writing, ambitious pieces that unfold unpredictably, deploying different rhythms, different combinations of instruments, and dynamic shifts without every losing a sense of form or groove.
-Jon Garelick, Boston Phoenix

De Lucia is refreshingly personal in his improvisations and the charts apparently are fairly flexible, leaving a lot of space for soloist and supporters to stretch out. Let’s hope the fresh air continues…
-Stu Vandermark, Cadence Magazine